Lewis Smith is a spotted bass mecca, but water is up and in the bushes, so largies may play. But I still think that in an every fish counts format where all bass over 1lbs 8oz count, Spots will probably carry most top anglers.

Below is a recap of my picks for both the BPT traditional game where you pick 10 best anglers out of 80 and also the predictor game, which is like Prop bets for Bass Fishing.

Hopefully, MLF makes improvements to their fantasy fishing game and this is just a jumping-off point.

This week we break down LAKE NEELY HENRY Bassmaster Elite Series event out of Gadsden, AL. This is the 6th fantasy fishing event of 2021. Be interesting to see if an Alabama angler like Gerald Swindle, Steve Kennedy, or Scott Canterbury can bring home the Victory this week.

Be sure to tune into BASS Live, cause Coosa River spots are super mean and big, they should be a blast to watch. I expect spinnerbaits, buzzbaits, topwaters, swim jigs and so much more power fishing to be strong players this week.

For the Neely Henry video version of the picks, watch the video below: 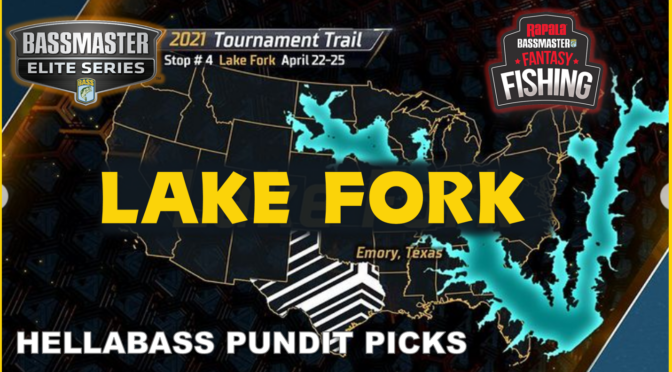 This week we break down LAKE FORK Bassmaster Elite Series event out of Emory, TX. This is the 5th fantasy fishing event of 2021. Can Lee Livesay defend his home turf? Are you ready for the New Mercury Drain the Lake Fantasy Fishing Game? Either way, with both a bass Spawn & a Shad Spawn going in, this should be smash fest tournament to watch on Bass Live this week!

This week we break down the Tennessee River Bassmaster Elite Series event in Knoxville, TN.  This is the 2nd fantasy fishing event of 2021.  Will this be Brandon Lester’s 1st Elite Series Victory?

Don’t believe it either?  Check out my first Pundit piece previewing the first 2020 Bassmaster Elite Series event on the St Johns River.

New for 2020 is my newly created Fantasy Fishing Group called BEAT HELLABASS.  Make sure to follow the link, joing the group to win great prize packs from Bass Utopia & BassTEK on top of the great prizes from Rapala & BASS.

Also, new for 2020, I am launching a audio version for Fantasy Fishing edge that you can download via your favorite podcast apps.  Search Fantasy Fishing Edge or follow this link to the home page and go from there.

For those that love the original YouTube shows, those are not going away.  Follow this link or watch below.

Mid-August brought one of the most challenging tournaments I have fished in a while. The MN BASS Nation TOC was being held on Island Lake Reservoir north of Duluth, MN. Island Lake for a large tournament comes with a handful of challenges. For starters, it is one of the smaller venues we fish TOCs on, it also has a fairly low population of bass per acre compared to most of our fisheries resulting to a fishery that doesn’t respond well to heavy fishing pressure of a large tournament.

Coming out of practice, I had a few deals that I thought I could get bit doing. Topwater over rocky shoals, finesse tactics around grass and then a quirky specific dock pattern.

As the tournament unfolded, it became very apparent that 2 of those 3 things evaporated on me. Watch my day 1 tourney recap to see how that unfolded.

Going into day 2, I had a great shot at winning my first BASS Nation title. I ground & gave it all I had, but came up just a bit short. Congrats to Brent Haimes.

Lastly, if you play fantasy fishing, make sure to watch my final recap of the season for the Bassmater AOY Championship on Lake St Clair.

Coming soon recaps of my TBF Semi Nationals out of La Crosse, WI!

After a long break, the Bassmaster Elite Series is back to business & fishing this weekend on famed Lake Guntersville. Still, some time to get your Fantasy Team picks in, so check out my latest Fantasy Fishing Edge video to gain some insight to set your team and WIN!

Also, check out a tips & techniques video on how to Muscle up your Neko Rig. Not just for spinning rods anymore, hopefully, this video helps you gain confidence in a new’ish rig that will help you catch more bass.

For those that are long-time Bassin’ Blog readers, please consider subscribing to my YouTube channel and help me achieve my goal of 1000 subscribers by the end of Summer!

This blog always seems to fall to a lower priority than my YouTube, Instagram, Twitter, and Facebook. Definitely consider following me on any of those platforms to stay more plugged into my fishing activities and catch any fishing tips & nuggets that I pass on through those channels.

I am not giving up on the blog and for now, I am going to leave you with a few of my recent Bass Fishing YouTube videos. I am definitely putting more of my energy into my YouTube content as its something I really enjoy, but the downside it is time-intensive labor of love to produce high-quality original content in video format.

So here is a video recap of my trip to Alabama to fish the BASS Nation Central Regional back in April.

And topically if you live in the middle to the north part of the United States, here is a video covering my favorite bed fishing baits and tips.

Lastly, if you are into fantasy fishing like I am, please check out my YouTube bass fishing podcast series about fantasy fishing, called Fantasy Fishing Edge!