For the most part, this year was to be about fishing less but bigger tournaments.  With limited time off of work, it’s either stretch myself thin and get minimal prefishing in for several tournaments or hopefully get adequate time for a handful.

That being said, it was quite clear, I had large gaps between tournaments and I decided I would fish some smaller local events to keep my self sharp and stay sane.  These smaller events would require little to no practice time and reduce amount of time away from home and the family.

So the first of these events would be the season opener for Bass Pursuit on Crystal Lake near my house.  My buddy Bill was my partner.  It was a small 10 boat field and just a 5 1/2 hour tourney day with a 4 fish limit.  Being that we were on the lake the day before, we had a pretty good idea the fish were getting ready to move up and spawn and had a good idea what areas had the most potential.

Things started a little slow, but picked up a few fish on a weightless ring fry around docks.  We then worked our way into areas with more bedding fish, gradually we upgraded our catch throughout the day.  Once we started seeing the fish as the sun got up, the best baits were a White Damiki Hydra on a tungsten Jika Rig, Wacky Rigged BassTEK ReSticks and Biovek Kolt Fish Tails in Ayu on a dropshot.

If we could see the fish at a distance, the wacky rig was best, if the fish were fairly aggressive the Hydra converted them quickly, but on the toughest fish, the Kolt Fish converted them better then anything.  Overall we caught more the 20 fish and culled about 8 times.

For more details on the fish catches, check out my GoPro footage from the first 3 hours.

Our final tally was over 13lbs and we won by about a pound, but missed big fish by about a half pound, but both Bill and I had fish that would have been big bass, we just didn’t execute.

Since the tournament ended at 11:30am and we didn’t have to be home right away, we went back out released our fish and then did some more fishing.

I even caught my first frog fish of the year on an Evolve Nervous walker, it was a pretty nice fish and caught several more after that.

All in all a good opening weekend!

Well the Minnesota Bass Opener is almost 10 days ago now, so I should probably throw a quick blog up, now or never.   Went out in the morning on Crystal Lake with my buddy Bill on Crystal Lake to do a little catching and scouting for a small Bass Pursuit tourney that was on Sunday. 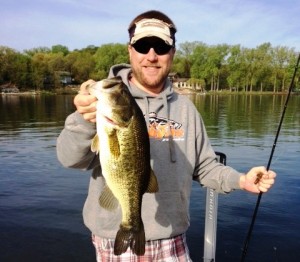 We started out on some deeper drops, but quickly ruled that out with just a few bites and one small fish on a 1/2oz BassTEK Tungsten Football jig.  Next step was to hit some points leading into shallower bays as staging areas.  On the 2nd point, I quickly caught 4 fish on 4 casts with a ring fry on a mojo rig.

From there, we went into some shallower bays and that is where the fish were and coming in as we fished.  It was quite obvious that love was going to be in the air real soon! 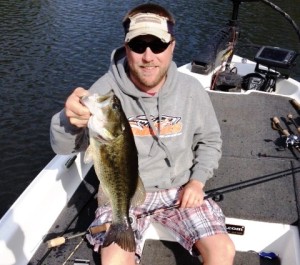 We went on to catch a whole bunch of fish on weightless ring frys and BassTEK resticks rigged weightless and wacky style, including a couple fish over 5lbs.

Also, check out my video montage of the first 3 hours of fishing….